Gearing up for Firefox 3

There's been a lot of hype towards Firefox 3 lately. The new version of our most popular browser has been in development for quite some time, and is due for release in June. For those of you that aren't aware of Firefox yet, it's an alternative web browser to Internet Explorer, that is released under a free Open Source licensing model (basically meaning anyone can help in developing it, fixing bugs, translation, or artwork, unlike proprietary software which is kept behind closed doors). Many people have already switched to Firefox for numerous reasons, such as tabbed browsing, integrated search, it's much faster, supports better web standards, a wealth of extensions, but most importantly protection from Spyware and other Internet threats and scams, or just the fact that it is Open Source.

Sadly, a lot of people only tend to hear about Firefox, after suffering from a really badly Spyware infested computer and taking it into a technician, getting it cleaned and being recommended Firefox as a preventative measure for the future, together with a decent Spyware removal program. These sort of trends are happening all over the world, we are not the only ones raving about Firefox. Firefox is continuing to show a rise in popularity and there are still no signs of slowing down. Firefox usage is now almost at 20% worldwide, however some countries such as Germany are much higher than that.

Firefox 3 is currently in Release Candidate stages, which means it's "almost" complete, but not quite. Firefox 3 is so stable though, a lot of people have found it more stable than Firefox 2 and are already happily running the Release Candidate now, despite it not even being finished. The latest version of the Ubuntu operating system, already has made a bold move to include Firefox 3 as it's default browser, despite it not even being finished yet, and it runs extremely well (I use Ubuntu as my primary operating system). Firefox 3 includes hundreds of new features and over 14,000 15,000 bug fixes and improvements. Rather than re-listing them here, I thought I would link to this screencast video.

Getting Firefox in the Guinness Book of Records

There's currently a campaign going on, led by the team at spreadfirefox.com, to try and get a record for the most downloaded software in 24 hours, on the day Firefox 3 is going to be released. The campaign is called "Firefox download day 2008" and you can already pledge to download it now, more information can be found on the Firefox download day website. Let's see if we can increase the number of downloads for New Zealand.

Update: Mozilla have just announced today, that the final release date for Firefox 3 will be June 17, at the time of writing that is only 5 days to go!

Update: Firefox 3 has now been released, go to the Mozilla Website and download it now. Apparently it was downloaded so many times the download server crashed at some point, but is back online now, that comes to show the immense popularity of Firefox. I had a look at the download counter, and it's already up to 2.9 million downloads in less than a day! At current, it's being downloaded at about 4600 times per minute, that's insane! I just checked it again an hour later, and it's now over 4 million downloads going steady at over 10,000 downloads a minute, that's absolutely amazing, Firefox has to be the most popular open source project ever.

Edit: spreadfirefox.com doesn't exist anymore, but getfirefox.com is it's replacement. 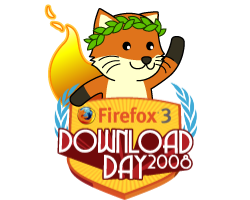